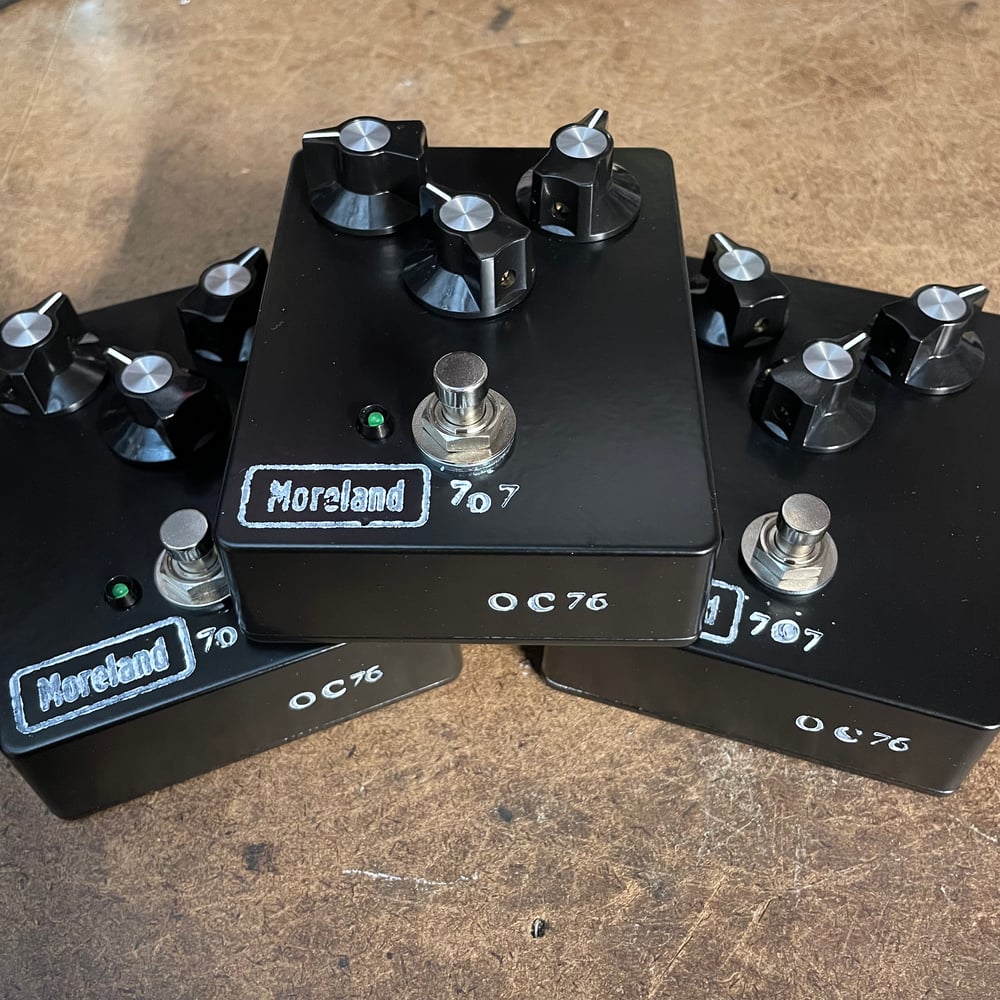 So, late 2021 I came into a bag of new, unsorted Mullard OC76. Out of that bag of 60 or so, I found five that were suitable as Q3 of the 707 circuit, while the rest generally fit into Q1 and Q2 "buckets". Out of those five, I've picked three to put into this edition, and listened to damn near each transistor in the first two positions until I found the right sets for each pedal. The results, i think, are very special.

The seething, tenuously-reigned chaos of previous higher gain sets is traded for that instantly recognizable "Correct" Rock and Roll character. Still remarkably menacing, with all the red lights and fog machines you'd expect, but perhaps more Shirtless Black Denim Vest than Blood-Stained Leather And Spikes, get it?

PNP, Positive-Ground operation on these, they will not work with a daisy chain. Please use the provided battery or isolated power supply.

-Controls are, from left to right: SUSTAIN, BALANCE, and ATTACK.
Sustain controls the amount of saturation to the third gain stage, fully clockwise can get you into saggy-bottom Neil Young territory. Balance is the closest thing you have to “volume” however in the strictest sense it does not work the same way. It may more accurately be named “Intensity”. Attack is somewhat analogous to “tone”, but also does not work the same way. Counter-clockwise is “thinner” and clockwise is “fatter” - it could also be renamed “focus”.
-All three controls are interactive: you may not hear a huge difference in sustain or attack with higher balance settings; you may hear a volume drop with thinner attack settings, and can compensate with higher balance; you may like a lower sustain setting if you have gain stages before the pedal. My favorite setting is all three knobs at 2:00.

All my pedals come with a calculable, yet arbitrarily-long-time warranty. Basically, I want my pedals working whether you bought it from me or not, whether you broke it on purpose or not, etc. If something isn't right, I'll make it right. (However, this excludes any kind of tone-chasing, alterations or mods. That journey is your own.)